Touch my car and you’re DEAD

I wake up to THIS today…AND I DIDN’T EVEN DRIVE MY CAR YESTERDAY! AND IT WAS IN OUR GARAGE! WTF HAPPENED?!?! I go to pick up Eddie on my way to work and he goes, “What’s up with your car? Your headlight is broken.” And I thought I was going to start crying right there. It’s just GONE! And Eddie was with me the last time I drove my car and it was fine…I DIDN’T EVEN HIT ANYONE! That other damage is from when the Valet attendant hit another Benz with my Benz but that’s a whole different story…UGH. But I guess this is good news. I can get it fixed and order a matching pair for the other side which has been broken for a while now ever since someone at Trader Joes ran into my car the ONE DAY I was parked head out. It’s okay, I’ll take care of my baby and get a wax and a nice hand car wash and everything will be okay.

So I guess Whitney Houston is dead. Don’t really know to feel about that.

But maybe this will make people feel better. 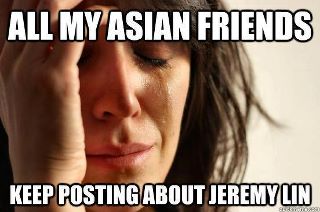 *shrug* It sure put a smile on MY face. Hey! It’s all we have! Ever since Yao’s been out we’ve been DYING for another NBA Asian Superstar! Hahaha. And contrary to what John says, I doubt Lin has sold his soul to the devil like Dr. Faustus. And if he has sold his soul than he got a much better deal than some other players who I won’t mention for fear of being shanked.

Or maybe this will cheer some of you up. Hahaha. Ah~ people are hilarious sometimes.