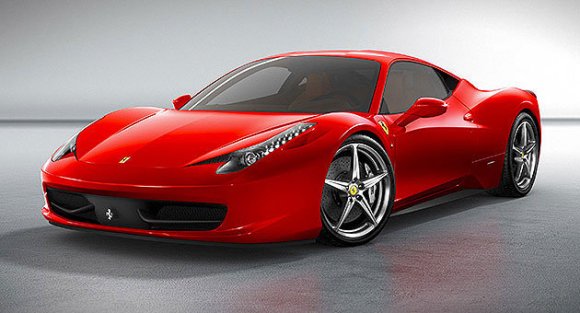 The Black Masked Mamba just paid for this 458 Italia with one check.

Man if I had that kind of cash this is NOT the car I would be getting. I guess I’ve never been too crazy for Ferrari’s. To each his own right? Plus if I’m paying 6 digits I want a little more than a V8…

I mean Kobe has a deal with Mercedes so I would’ve gone with that something in that field but I’m biased about that so it can’t be helped.

But jesus christ! This car is supposed to retail for $230,000…someone got the wool pulled over his eyes or maybe he wore his mask to the dealership and all the numbers were skewed at an angle…whatever it is I would not pay another $100k for…what? Options? Hahahaha.

Weird. I guess the next time I see one of these I’ll know who’s behind the wheel. (A tool).

But Kobe already had a Ferrari F430 and the 458 Italia replaced that model so I guess it only fits that he HAS to have both.

The 459 Italia was released in 2009 at the Frankfurt Motor Show. The engine has won multiple awards such as the Best Performance Engine in 2011 and it also gets the most power per liter for a naturally aspirated production car engine.

To be honest I don’t even want to write about the specifics of the car because it doesn’t interest me that much. What? I’m a German car girl. Hahaha. It is what it is.

Why were the being recalled? Because they were spontaneously catching on fire. HAHAHAHA. 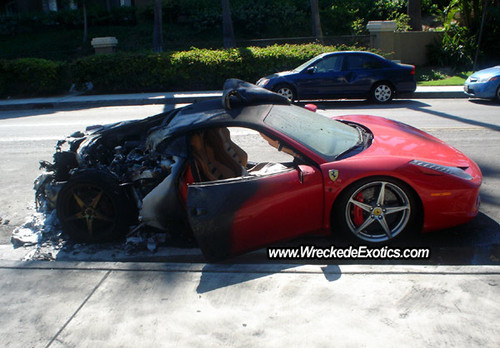 What was the problem?

Apparently the adhesive that attaches the heat shield under the rear fenders would become flammable at high temperatures. And seeing how a lot of Ferrari owners are in California or high climate areas that is NOT a good thing. They ended up replacing the adhesive with rivets. What a sad waste of a car right?

Haha. How scary would that be? You go to Rodeo Drive for some shopping and you come back and your Ferrari has caught on fire. Lolz.