I’m a fat kid…on the inside 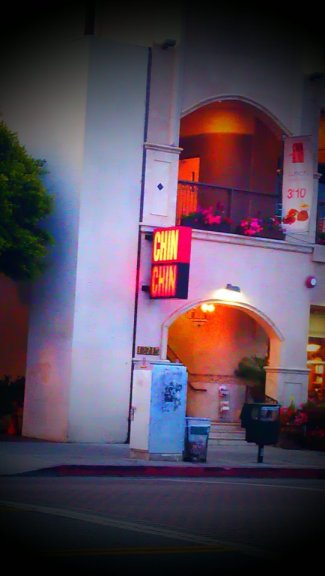 Thank god it doesn’t show on the outside! Hahaha.

My voice is still completely gone though…

Friday I had a day off so I spent it with…Phoebe! We had some QUALITY girl time and we got to talk about a lot of things. She hasn’t really explored LA too much yet so I decided to show her around so I drove basically EVERYWHERE from 4 o’clock on out. I took her to Wackos and it literally BLEW her mind. Didn’t spend TOO much time there because I was hungry so we went to go eat at Umami Burger. FUCK IT WAS GOOD! Well…it’s ALWAYS good. I got to see all the usual people and Scott came in to work while we were eating too!

What did I have to eat…A something Poutine Burger? I don’t know what it was but it was delicious!

Mushrooms + Cheese + Beef Patty + ON A BED OF FUCKING FRIES.
Can I get another one please?
And then Scott brought out this CRAZY dessert!

Two layers of thin oatmeal cookies that were like deep fried with caramel sauce and ice cream on top. I thought I had died and gone to heaven! FUCK it was good…

And then I drove down Laurel Canyon all the way to Studio City which was pretty nice. I bought a new black dress but no pictures yet…sorry. Walked around, talked some more.

Then I drove back to my place and we swapped some clothes, talked, tried to watch some stuff but didn’t really have a chance to because we were talking so much. All in all it was an AWESOME day! It was my first time hanging out with Phoebe but it felt like we had been friends forever! I’m sad it’s not going to happen more often…with me moving and everything. I just hope everyone comes to visit me sometime.

Saturday I went to work. It was busy but I was working a private party so it wasn’t bad at all. I had some…Fat C**** that attended and DIDN’T tip but fuck her.

And then I went out with Setsu. I had a bunch of stuff to give her since I’m moving so it made for a nice opportunity to hang out and talk like old times. I think we’ve known each other … god I don’t even know how many years it’s been. It’s been a LONG time, that’s for sure.

We went to eat Pho because we had both been craving it so it was AWESOME! Syracuse losing wasn’t awesome but I got over it. (No I didn’t). Apparently Amy’s parents drove 4 hours to NC to watch the Kansas game. That’s hardcore. I have faith that they’ll win. Not even sweating it.

After that we went to this place called Yellow House near my house. It’s literally less than a mile from my house and I’ve never been there. UGH…but there’s a good reason why. I hate rude servers. COME ON! I’M FUCKING PAY YOU TO WORK, DON’T TALK BACK TO ME!

Or the Inside/Outside anyways. The ACTUAL outside is a big yellow house. I’m sorry but it looks gay as fuck. I call it like I see it.

The nurse told me not to have any soda, caffeine, dairy or any of that good stuff but I saw an Almond Roca Latte on the menu so I couldn’t resist! Too bad it sucked donkey balls. It tasted like that stuff you make by adding those coffee packets they have at hotel rooms with hot water, like watered down shit. It was gross. Sorry Setsu. She ended up getting a Shaved Ice with Fruit, which also looked disgusting…ugh fruit. Whoever thought ice + condensed milk + fruit + strawberry ice cream + fruity pebbles was a good idea should be hung.

And they also had smores on the menu so I thought, hey why not?

LOOK WHAT THEY BROUGHT ME! 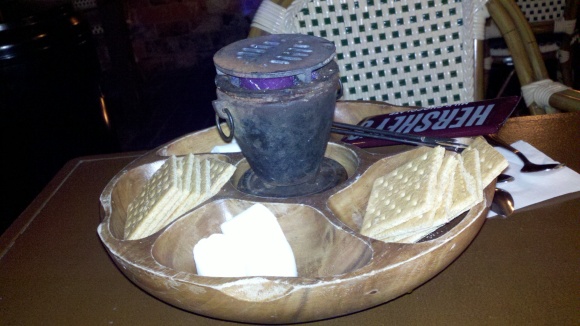 WHAT? AM I OUT IN THE FOREST? I don’t want to make my own god damn smores AND pay for it! Who do these people think I am? REALLY?

Oh and you know what else happened?

I asked the server for a plate and instead of saying okay do you know what he says?

“Oh that doesn’t come with a plate”.

NO SHIT IT DOESN’T COME WITH A PLATE!

EVEN WHEN YOU’RE OUT CAMPING YOU GET A FUCKIN PAPER PLATE. JESUS CHRIST! WHAT AM I AN ANIMAL? I’M JUST SUPPOSED TO SHOVE IT IN MY MOUTH WHEN IT’S READY AND EAT IT LIKE A SQUIRREL WHO JUST HAS TO STUFF IT IN ITS CHEEK UNTIL LATER? FUCK YOU.

I am NEVER going there again…I’m sticking to my normal cafes.

Setsu and I talked a lot too which was nice. I’m glad I was able to get some more stuff out of my room. It’s so hard to clean! … But I’m getting there…slowly but surely.

Today I just went to work and it was busy as fuck. It’s raining in LA today so once people got seated they just REFUSED to leave…I had people waiting over an hour for a table. Oh well. It is what it is. As long as we made some bank tip today…I’m good. I was also talking with a coworker about going to the Lakers @ Clippers game but it’s so expensive. Ugh…it WOULD be nice to go to one more game this season before I leave and before the playoffs… Mark and I should be back for the Playoffs. Not too sure what’s happening this year because we’re going to Hong Kong but I’m sure we’ll figure something out…

I’ll figure out if we’re going or not. I still have some time.

Oh and before I end this entry…look what I got for my cousin!

I bought him a Nike JUST DO IT shirt and a hat from the Pop Up Shop at work. Pretty neat right? He’s going to be the coolest kid in 6th grade! Hahaha.

AH THE THUNDER BEAT THE HEAT! I don’t know if I should be happy or sad…