I hope everyone had a good New Year’s Eve last night! And best of wishes to all my followers and friends for the New Year!

Thank you guys for supporting my writing ventures throughout 2012! You guys are the best!

And I know this is a little late but I HAD to share with you guys all the amazing gifts I got for Christmas this year!

First from my hubby Mark! 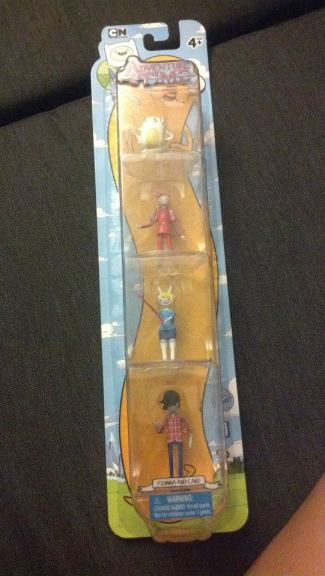 I got Adventure Time figures

They’re all from that one Adventure Time episode where the Ice King is reading his own made up story.

I ended up placing them on top of the Adventure Time art pieces that Mark had got for me earlier. Isn’t it cute? They fit perfectly!

(And yes, I later ended up switching the placement of the figures because Mark pointed out that it would clearly fit better if in reverse). 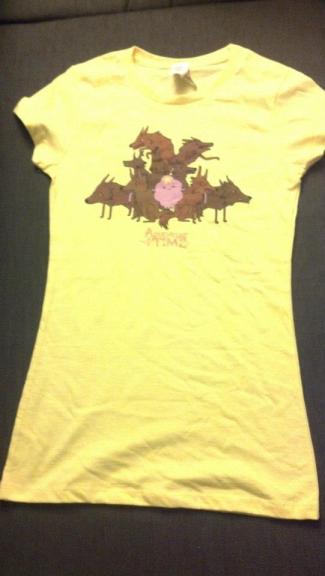 He also got me this ADORABLE Lumpy Space Princess shirt!!!!

Oh My Glob! I love this episode!!

And here’s a closeup of the shirt: 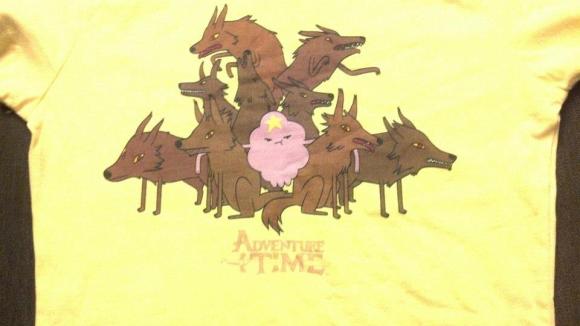 Mark knows me so well! ❤

He also got me this absolutely fantastic Tokidoki shirt as well!

He really does spoil me silly…

And there was this art piece at a local boutique that I was totally smitten with and knowing how much I love art he bought it for me for Christmas!

If you see it in person it is absolutely stunning! This person did an amazing job! And it wasn’t that expensive either considering how pricey art usually gets!

And it’s all original too!

The only problem is that I’m not all too sure where I want to hang it… the wind in Hawaii is a huge problem and I’ve had glass frames shatter in a heartbeat so I’m just a little worried. BUT I have been seeing those Command 3M frame stick strips and I think I might just give those a try and see if they really do work as well as they advertise that they do. I’ll have an update about it when I do go ahead and give it the ol’ college try.

And that wasn’t even the last of it!

I’ve been saying for the longest time how much I want to play Ecco since I had such fond memories of it when I was younger that he actually found a copy for me! And luckily enough he still had his dreamcast system back at his parents house so I was psyched when I opened it on Christmas!!!

Sad news is that the controls suck and I can not play for shit! But I will give it another go around once I finish playing Yakuza 4. But I’m still really excited to have it there for me when I do come around to playing it again!!!!

And last but not least…we got to go to a Timberwolves home game the day after Christmas!! 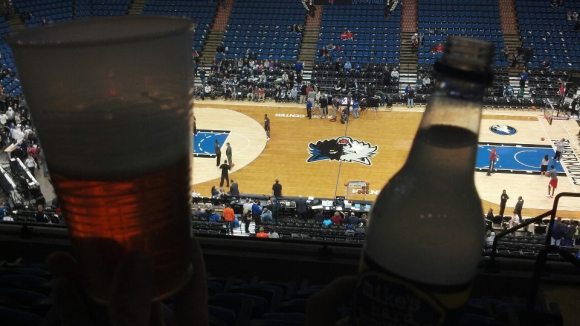 We each had a drink and had a blast!

It’s too bad the T-wolves lost to the Rockets though. They were leading the whole game but boy James Harden got lucky with most of his shots. That’s for sure.

Mark was pretty disappointed that they lost but I still had fun.

We were at the game with the 3rd highest amount of people in attendance. It was a little above 20,000 people.

Did you know that a Timberwolves game can seat more people than a Lakers game?

And that a Clippers game in the same Staples center can seat about 63 more people than a Lakers game?

Weird huh. It must be some of the courtside seats or something. Who knows.

I also received a very sweet Christmas card from my friend Missy:

And my longtime friend Bow sent me all these cuddly creatures and scrumptious treats all the way from Australia! Thanks Bow!

Those chocolates are delicious and I put up the finger puppets as art on my wall. I’ll upload a picture when I complete my art wall when I get home. 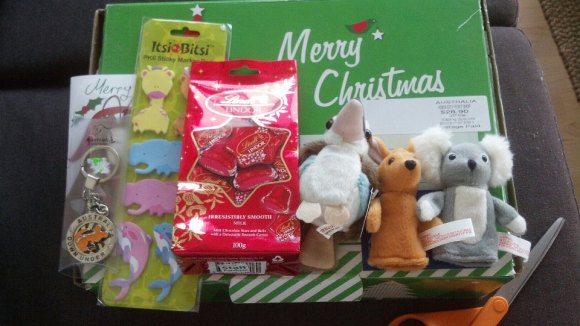 And one of my best friends Patty is such a doll that she sent two sets of Christmas presents! One with the cutest pair of Hello Kitty Leopard Jeans, ornaments and hair ties. 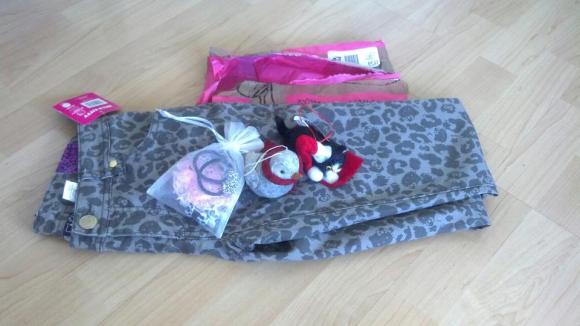 And another package with just a whole bunch of fun surprises!

She sent 3 sugar cookies (2 Christmas themed & 1 Spongebob cookie) and the family dog ended up getting into the Christmas cookies last night. I wasn’t angry but more worried about if the dog was going to be okay. She ended up puking it back up today but she seems in better spirits now which is good.

She knows I like foxes so she sent the cutest sweater and the cutest desk figure. Again, I’m just so worried that the wind is going to knock it over and smash it into a million pieces. Maybe I can just command strip everything into place! 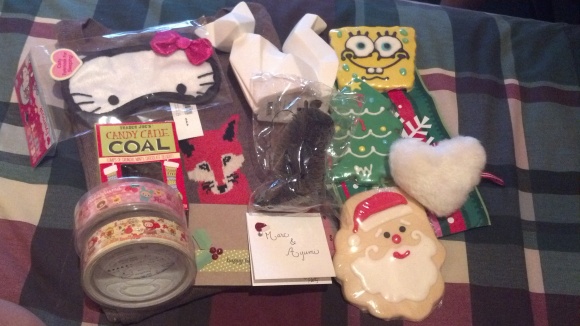 And these are the gifts I got from his family!

(They also got us our hotel room in Minneapolis for the Timberwolves game).

I asked them for this specific Smashbox Foundation and they actually got it for me!

I’ve wanted it ever since I saw it at Sephora but it was too expensive for me to buy so I was so thrilled to get it on Christmas!

Oh and I guess before I go any further they asked both of us what we wanted for Christmas and we both each gave them a list of stuff that we wanted.

They got me so much stuff from my list it was crazy!

They got me the Dostoyevsky book that I wanted! (Which is really good so far. I’ve been sidetracked by other things but I will get back to it…probably on the plane ride back home).

They also got me the Adventure Time game for DS which I beat yesterday. It has it’s pros and cons but I had fun with it. I’ll probably do a game review in a future blog update if anyone is interested.

Also a $100 gift card to Victoria Secret! I think I’m going to wait till I get home to use it though so we don’t have to carry home too much stuff.

I am going to take a permanent marker and write ‘LAW SCHOOL’ on Hello Kitty Bank’s forehead and hopefully that will encourage me to save SOME money for Law School. A girl can try right?

Mark’s sister got me a rolling pin! (Which I also asked for).

And her daughter (my niece…in law?) painted this pie pan for me since Becky (Mark’s sister) owns a glass shop where she does lots of crafts and stuff. I wanted a pie pan so this was perfect! Happy!!

And last but not least his parents also got me art supplies! I left my paints and stuff at home in Los Angeles and I wanted to start again so I was ecstatic! I have started painting again too. I haven’t finished but I will once I get home.

I had an amazing Christmas! I’ll upload more Christmas cards and stuff once I get home to my mailbox.

I hope everyone enjoyed their New Years eve as much as I did! 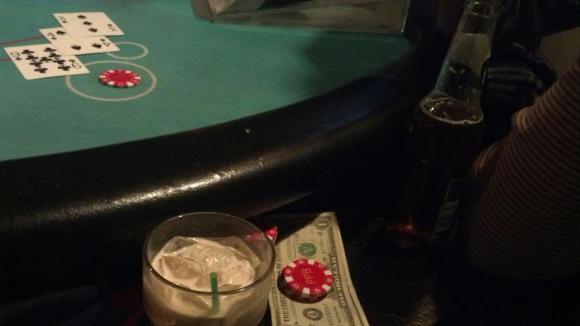 We hit the town, shopped, used our gift cards, ate delicious Mongolian BBQ and then went to Dempseys to play a little black jack.

Kahlua + Half & Half and a few rounds of Black Jack make for an amazing New Year’s Eve!