I’ve finally set up my computer (and my apartment)! 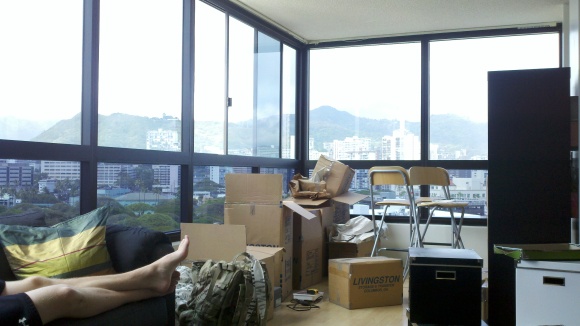 Excuse all the boxes. I actually took this picture earlier this week so it doesn’t look like that right now. I’ll take another picture once I dismantle all of the boxes and throw them away. I’m about 80% done but it’s hard for me to carry the huge boxes downstairs so I’m taking my time. It’ll all get done though. I finished most of the other cleaning so we should be good.

We went to go look for a dinette set yesterday but the one we wanted is currently “in transit” so the lady said it would be a couple more weeks…I guess we’ll see. We’re having our open house tomorrow so we really wanted something in the house by either today or tomorrow but I guess that’s seeming a little improbable at the current moment. Oh well. It is what it is.

So yeah, I finally set up my computer so I can write real posts. I’m still not used to writing long posts on a laptop so I’m glad to be back on my computer. I forgot how good it feels to just sit in front of the computer and just write. It’s amazing! And I’ve missed all you guys too! I’ve mostly been cleaning and going to work and watching playoff games. But I’ll talk about that later.

I just have to say, I love our TV though. Not only do we get sports in HD but also the Food network and all my games look so amazing! Muhahaha. It’s bad because I don’t think I do anything else…hahaha. It’s so pretty…I don’t want to be away from it! I mean I spent the whole morning today watching “Food Network Star” which I am now officially hooked on after 2 episodes. DAMN YOU CABLE TV! Just SUCK the life right out of me why don’t you?!

Oh and the other day I was feeling a little down so I went on a little shopping spree and splurged on myself. Want to see what I got?

The girl at Gamestop convinced me to buy Killzone 3 and I actually like it a lot. Again, if I could pull myself away from Chopped or Storage Wars I would be playing more often…but it’s SO HARD! AH! For those of you who don’t know, I’ve never had cable my whole life except for those brief periods while staying at a hotel so this is something new for me and I just can’t get enough of it! I mean, I didn’t even watch TV these past 2 years. My TV was only on when I wanted to play video games and that was about it.

Oh and I also pre-ordered Black Ops II so they gave me a free poster and I get some cool perks for preordering early! Yay! This actually made my day because I left all my other COD posters back home in LA. (God I hope my mother doesn’t rip/throw them away…) I wonder where I should put this one…

I actually went to Home Depot before work yesterday and I got some stuff to hang up the art that I brought with me so I’ll get started on that today when Mark gets home. I can’t wait to give our apartment a little flare. Our place is so modern though it’s pretty cool.

I bought one other thing for myself because I just couldn’t resist.

Hmmm…what could it be?