I wrote a review for the ‘Walking Dead’ video game by Telltale games for my University paper and they published it today!

Here is a link to the online version of the article.

Zombies and apocalyptic themes remain popular in the video game world today, but if you’re tired of the run-and-gun gameplay typical of the genre, Telltale Games has taken advantage of the popularity of “The Walking Dead” television series and created a video game that will satisfy any zombie fanatic – even those who aren’t fans of the show.

“The Walking Dead” is a decision-based game that is more focused on actions and emotions than the typical first-person shooter. It is available for platforms such as iOS, Mac OS X, Microsoft Windows, PlayStation 3 and Xbox 360 and has five episodes that were released between April and November 2012.

While most “Walking Dead” fans are familiar with the characters from the television hit, this particular game is based on the original comic series by Robert Kirkman. Like the show, it has the same basic concept of a zombie wasteland, but also adds new story elements that allow the player to decide the outcomes to each story.

Gamers play from the point of view of Lee, a “criminal” charged with murder – the specific details are kept secret. It is the gamer’s job to choose which path Lee takes – whether it be one of aggressive, brutish behavior or compassion ¬– and if he is to do the right thing in any situation.

Each new decision has lasting consequences and changes the outcome of the overall story. While other action-based games are only fun the first time through, the same cannot be said about “The Walking Dead.” I’ve gone back several times to see what other alternative endings I could encounter, and I’ve watched many “Let’s Play” videos of situations that I haven’t even come close to yet.

Telltale Games has made a thrilling action-based game; players are made to anticipate each cliffhanger and life-changing event. With the use of quick-time events and timed responses, you have no time to zone out or get bored.

The action and situations presented are intensely realistic – whether it be jumping onto rooftops or deciding whom to side with in arguments among the group. I’ve flinched more than a couple of times when exploring unknown territories, having the lives of others solely in my hands and when hit with sudden “walker” attacks. A sense of urgency lurks in the background with risky and uncertain decision-making. Mix this with fear and anticipation, and you’re never sure what could happen next.

At the end of each episode, the game will display statistics of your actions compared to the choices that other gamers have made during the same situations. Were most people good, or did most people choose to sacrifice the safety of others for their own benefit? The outcomes can be surprising.

“The Walking Dead” is definitely one of the best games of 2012 and well worth the investment. It is suspenseful but also has a gripping storyline with developed characters. Fans of the television show, try out the game to get your “Walking Dead” fix before the series returns in February. For those of you who have already enjoyed “The Walking Dead” game series, look out for the second season, set for release sometime in 2013.

Five torches out of five

Thought I would just post some pictures of what I’ve been up to everyday while I’m here.

First picture is of some Taro Boba Milk Tea! Which was delicious! I ordered a small but it turned out to be pretty big.

This was the picture from the first day of school.

It was raining pretty hard in the morning but there’s always a rainbow during/after so I thought it’d be cool to show you guys.

It sucked for me though. Unprepared. No umbrella. Wearing a see through shirt.

NOT A GOOD IDEA.

And this was the second day of school.

Still raining. Still unprepared. But at least this time I was NOT wearing a see through shirt. Phew~

Took me about 2-3 days of working on it after school but I finished the 1000 piece underwater puzzle that I had bought over Thanksgiving vacation in LA.

It was actually a lot of fun. (No Mark did not help me put it together).

I think this is what happens when you are an only child. Board games don’t really do it for you but a PUZZLE! Now THAT’S a WHOLE DIFFERENT STORY! Oh man did I love putting together puzzles when I was a kid.

No I did not have a sad childhood, thank you very much. I just like what I like. That’s all.

And now it’s time to look for another one to complete!

And I was like all other Lakers fans yesterday, greatly disappointed.

WE HAD IT TOO! I thought we were SO lucky when Parker through it out of bounds but NO. We have to F*** it up like we always do in the 4th quarter. Typical Lakers. *Sigh*

I like the Spurs though but this would have been a good win for the Lakers. A girl can dream.

And Dwight Howard, Jordan Hill and Pau Gasol are out for tomorrow’s game.

I thought the injuries would be not as frequent now that we’re back at a regular season but again I was mistaken.

UGH PLEASE SOMEONE JUST TAKE DH OFF OUR HANDS!

WE DON’T WANT HIM ANYMORE!

(And I NEVER wanted him in the first place!) 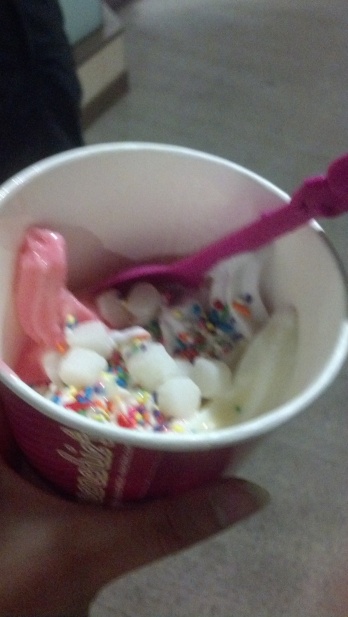 We went and had some yogurt yesterday so that made things a lot better.

And I started writing and editing for the University paper! I am so excited!

I’ll post a link to the University blog to which I will probably be posting to.